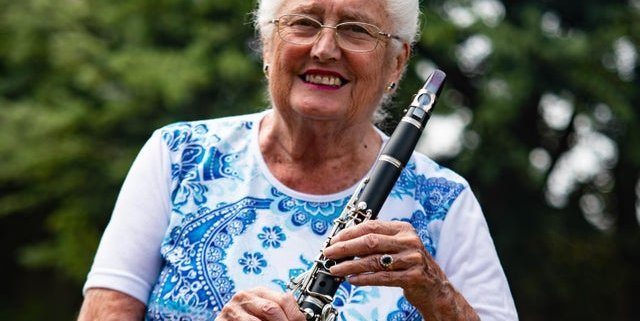 Maxine is breathing easy now and find out how to take part in research trials with Blackpool Music School.

After struggling with asthma for 50 years, Maxine Bradley was asked if she had ever considered learning to play a wind instrument. She tells James Graves of The Blackpool Evening Gazette how the unusual remedy helped improve her breathing and reduce her asthma attacks.

When Maxine Bradley decided to learn to play the clarinet, she had a very specific goal in mind. Like most people, she had a few songs she wanted to master. But what she really wanted was to stop her asthma attacks.

With help from Blackpool Music School, the 78-year-old, who first started learning around a year ago, has found her condition has dramatically improved. Maxine, who lives in St Annes, has suffered from asthma since she was 27, but had become concerned as it seemed to be getting worse.

She saw a doctor in the United States, where she lives for six months a year, who suggested the unusual remedy. Learning a wind instrument, she was told, could help strengthen her lungs and improve her breathing.

Maxine, of Highbury Road East, said: “I met with a doctor as I was getting quite wheezy and concerned about it. “After I was checked over the doctor asked if I had considered getting a wind instrument to blow as it may help with my throat.

“I decided to get a clarinet and had started doing the scales on it and my husband had noticed a sign while out about Blackpool Music School so I phoned up and asked if they would mind teaching an old lady how to play.”

John Shaw, the founder and chair of Blackpool Music School (BMS)said he was more than happy for Maxine to have lessons with Ray Jones at the school.

He said: “Maxine’s ambition, when we met, was to learn to play the Acker Bilk song, Stranger On The Shore. Following a 30-minute taster lesson, she agreed to sign up for a six months course.

“In order to play the clarinet, you need to control your breathing to play long phrases.

“Practicing this taught Maxine to control her breathing. Over the period, she reported a significant reduction in her asthma attacks, as her lungs became stronger.”

And now Mr Shaw hopes to carry out research into the health benefits of wind instruments, having seen how it helped Maxine.

She said: “My breathing is much better, even for an amateur, and as far as the trials are concerned, I’m all for that. It’s really helped me and if it helps other people then that is great.”

“Played just like a clarinet or other wind instrument, it does not need to blown as hard and it can be altered in order to help to strengthen the lungs over a period increasing the amount of air needed.”

John said the school has been able to negotiate support from Roland to undertake research, using the new Aerophone to help people with asthma.

He said: “We are currently looking for a doctor that works in respiratory conditions to cover the findings of people taking part in the trials.

“ We plan to obtain with the doctors help an initial readings of the student’s condition, and over the subsequent six months period, take regular readings, culminating into a report on how their lungs have improved using this new instrument.

“BMS will submit the research findings to the NHS to provide evidence of the impact music can have on chronic medical conditions.”

John said he anticipates the project will cost around £16,000 over a six to 12 month period, and is in the process of applying to various grant-funding providers.

He added: “We believe that the evidence generated during the project has the potential to help make a big difference to asthma sufferers in the region.”

BMS is looking for eight students to take part in this pilot project, four young and four elderly, to work in two groups to be involved for a period of six to 12 months.

Founder John Shaw said: “We still need a doctor to help us as well and they would receive a fee and would only need to spare a few hours a month. It may suit a graduate doctor who is looking for some additional work and help with our research.”